skip to main | skip to sidebar

The reading went well despite all my angst. Maura MacNeil also read very well. I loved her poems and recommend that you search out her chapbook.

As long as I'm recommending books, here are some others I've read lately and recommend:

Ann Fisher-Wirth's Carta Marina: I've been a fan of Ann's work for several years now but this newest one is my favorite: She so expertly twines together the complexities of reconnecting with a long unresolved love, a sabbatical in a cold country, marital love, and an ancient map that seems to hold all the potential dangers of these first three. The speaker of the poems navigates through these territories discovering along the way that "love" cannot be easily defined, that it is possible to love more than one person, that the past inhabits the present.

Robert Cording's Common Life: These are poems of clarity and elegance full of a deep spirituality. I've been reading them slowly so as not to too quickly skim their many gifts.

Charles Bennett's How to Make a Woman Out of Water: I learned of this English poet after I read a poem from his book on Poetry Daily. I was so enchanted by it, that I ordered the book. Bennett’s poems are magical; they read like fables or nursery rhymes or lullabies. There are poems of water, poems of animals (bat, mole, moth), love poems….all of them short, lyrical, clear. They are distinguished by the poet’s absolute originality of voice and vision. Bennett sees things as they have never been seen before and makes you see them too. For instance, he describes a kite as “on string with down at the end.” And a moon is seen “with his face/ on top of the dark.” He can speak in the voice of the rain or of a pillow moth or snow, and get it so exactly right that you will believe the rain, moth and snow are speaking.

And, lastly, as of July 1st, there will be a lovely new online journal named "Cerise" (which I say not only because I have a poem in it!)... after 7/1 go check it out. http://www.cerisepress.com
Posted by Patricia Fargnoli at 9:11 AM 2 comments:

I'm reading at New England College tonight and for some reason I'm more nervous than usual. Not just butterflies, but big galloping butterflies. It must have something to do with reading before other poets. Like I feel compelled to be IMPRESSIVE and feel totally unup to the task. I would much rather read to "townspeople." Am wondering if I'd the only one out here that feels that way?
Posted by Patricia Fargnoli at 1:31 PM 3 comments:

Strange, this blog stuff…half-written to oneself, half-written to whomever out there might wander in, or perhaps even deliberately walk in. An odd mix that means, on one hand, I want to write as frankly and honestly as possible; on the other hand I am conscious always that there is a potential audience about whom I know little. And don’t we always revise our truths a bit when there is an audience, even a known one? Prufrock’s “face to meet the faces that I meet.”

Ah, musings only…since what I want to write about today has little to do with the above.
I was talking this morning, over coffee with a friend, about poems that respond to the poems of other poets. Like Elizabeth Bishop’s “Armadillo” and Robert Lowell’s “Skunk Hour” for instance. I love the idea of this kind of conversation between poets or poems. In fact, often when I’m stuck in my own work, I go, for help, to the poems of others. Here are a few of the ways they’ve helped:

• I read poetry often before I sit down to write it….usually one poet at a time, whose rhythms, style, subjects, I know, from experience, may have the ability to enter my body and put me in that strange semi-alert state that poetry sometimes comes from. For me, this usually means lyric or meditative poems. A few of my favorite poets for such “inspiration reading” are Louise Gluck, Ralph Angel, Linda Gregg, Yannis Ritsos, Antonio Machado, Charles Wright. But often a new book of poetry by a poet new to me will also serve.

• I enjoy writing poems that incorporate a line or so of another poet’s poem:
For example, I have a poem in my new (soon) book, Then, Something named “Poem Beginning and Ending with Halves of a Line by Ilhan Berk.

I’ve also written poems simply either using the first line of another poem…
or ending with the last line.

And I like the Glosa (or Glose): Starting with 4 consecutive lines from another poet’s poem. Then writing 4 ten line stanzas, each one ending with one of the trigger lines (in order). And rhyming the 6th and 9th lines with the final word of the stanza.
http://www.poets.org/forum/viewtopic.php?t=18656&sid=3ea6474a83c2aad2174272e9629f9cde

When I’m stuck (which is often) and no poem will come into my head or tumble itself out onto the page, I often turn to my favorite unblocking exercises. “Shadow Poems”
are poems that are, in some way, written “off” another poet’s poem, in other words, “shadowing” it. Here are three possible methods for doing this:

1. letting your unconscious do the shadowing: This is my favorite method of the three— for this kind, it’s best to choose another poet’s poem that is mostly lyrical, meditative, or elliptical in nature (i.e. not narrative). Print out the poem at least triple-spaced so there is room to write between the lines. Without reading through the source-poet’s poem, quickly read each line and think of a line that could follow directly from it and write it in the space below that line. Continue to do this for each line throughout the whole source-poem. When you are finished retype the poem with only your own lines. Then work with your lines, adding or taking away words and making adjustments until it feels like a poem.

Hints: You are likely to end up with what feels like gibberish, but ignore this and steam ahead. You are also likely to find that you’ve been forced into some interesting
phrasing and thoughts. It helps for you to have some sort of subject (NOT the same as the source-poet’s subject) in mind at least by the time you’re halfway through the lines. Relax and let your unconscious do the work without thinking too much.

2. Shadowing by the “moves:” Study your source poem to determine the “moves” (strategies) the poet has used. Perhaps, for example, the poet begins with a time of day and a person in a room, then perhaps the person does some kind of action, then expresses a thought etc. Write a poem about another subject that follows the moves of your source-poem.

3. Shadowing by syntax: Write a poem that follows the syntactical arrangement of the source poem. (e.g. if the source poem’s first sentence is constructed as: noun, verb, adjective object, you would do likewise in your poem)

A caution: Do be careful especially with #2 &3 that your poem NOT be so close to the source poem that it seems to be a rip-off. When you are done with your first draft based on the shadow, revise and revise and revise until it is your own poem entirely.
Posted by Patricia Fargnoli at 11:45 AM 7 comments:

I’m back and working at figuring out the blog world again. This time I plan to stay. Bear with me. What I hope to do here: offer thoughts about the writing process (mine, because that’s what I know best), about poetry in general, and just thoughts.

This morning, for instance, I am still smiling at the wonderful reading last night in Brattleboro by Tim Mayo, Barbara Benoit & Jacqueline Gens. Three strong readings: Barbara’s poems about breast cancer are brave, deeply honest, and she delivers them in a bell-clear voice. Jacqueline (whom I have not heard read before) surprised me. I knew her work was rich with imagery and a depth of thought, but in conversation she is a quiet person. As a reader, her voice is powerful and full of confidence. The poems ring with clarity, conviction, truth. I’ve heard Tim read many times but this was my favorite of all his readings. His poetry is witty, ironic, sometimes self-deprecating, impeccably crafted. His delivery, warm, his connection with the audience, total. Last night, he read poems whose titles had all been titles he’d considered for his book (The Kingdom of Possibilities, Mayapple Press, 2009) . As many times as I’ve heard his poems such as The Frog and the Snake,” “All the Women I Almost Married,” “The Red Convertible,” I hear something new each time, and each time, I listen with delight. Here, for instance are the last three lines of
“The Frog and the Snake:”

What I want to confess, though you cannot see,
is that I blinded myself and wandered about
the kingdom of my possibilities for many years

And these from “The Red Convertible:”

You call me about your car—why does it smoke?
I want to say desire has caught your engine
and your well-oiled heart has frozen from the heat.

It’s reading such as this one that remind me, over and over, of how much I love poetry.
And about what richness poetry and the community of poets has brought into my life.

Posted by Patricia Fargnoli at 6:15 AM 2 comments:

My poems, these days, are changing. Suddenly, without knowing, what has happened, I find myself writing short simple lyrics and miniatures. And I am breaking the rules.. I write about "beauty" for instance, about "loveliness" about souls and spirit. What is it?...this sudden, or perhaps not so sudden pull away from narrative, away from what I call my "flip contemporary voice" to a quieter one? And will this be "death" to any chance of publication?

I think perhaps the change comes for several reasons:

1. I am getting old and feel the need to pull in, simplify, quiet down.

2. The world has become too noisy with traffic, guns, newscasters, and the overwhelming glut of humanity treading through its streets. And one needs to retreat a bit simply to retain sanity

3. I wonder if it's "in the air" this backlash against post-modernism? Is irony falling out of favor? Are we tired from the absence of beauty and spirit in our poems? Because I have friends who've reported the same or similar changes in their new work.

Or maybe I am simply out on one of the many limbs of poetry....not a new one at all; only new to me?
Posted by Patricia Fargnoli at 4:44 AM 11 comments:

Patricia Fargnoli
I'm a former New Hampshire Poet Laureate and the author of 4 books and 2 chapbooks of poetry. The latest, Then, Something will be published by Tupelo Press, Sept. 2009. The others are Duties of the Spirit (Tupelo Press, 2005); Necessary Light (Utah State Univ. Press, 2000); Small Songs of Pain (Pecan Grove Press, 2001). I teach private poetry tutorials, classes and workshops 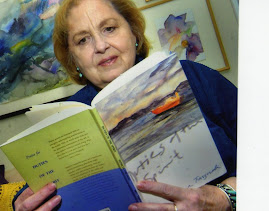